Do you want an easy unique appetizer? Let’s make popular Gambas al Ajillo or Spanish Garlic Shrimp. It is a classic tapas dish in Spain. It consists of succulent shrimp with a spicy and garlicky sauce. Perfect with some crusty bread!

Gambas al Ajillo is one of the Spanish tapas dishes. What is a tapas dish?

Tapas is popular as one of the riches of Spanish culinary culture. Spanish people have a habit of enjoying light snacks while enjoying drinks with colleagues, friends, and partners.

Tapas is the plural form of tapa or tapear in Spanish and is not a type of food. Tapas has a long history in Spain. There are various versions of history. It same as many regions in Spain themselves which have culinary characteristics in each region.

One of the most popular stories claims that, in the 13th century, King Alfonso X of Castille discovered that, while he was recovering from illness, he could eat and drink only small amounts. So, tapas menus like this are now available in the form of small bites. Another version mentions a habit brought by King Alfonso X when he took a small portion of food with a glass of wine between main meals.

Another story also says tapa is a snack for farmworkers that they eat between breakfast and lunchtime. They serve the wine using ceramic jugs and then covered with bread filled with ham or cheese so that flies do not directly enter the wine jugs. Tapa literally means to close. This culture of eating a small portion of food is known as tapas.

Tapas is actually intended as a snack when drinking wine or beer. So it’s no wonder that Spaniards generally go to tapas bars just before lunch or before dinner.

There are two types of tapas; cold and hot tapas. Cold tapas are usually found in southern or coastal areas. In colder areas, hot tapas is more popular. Typical tapas dishes are cutlets, cheese, pickles, olives, croquettes, omelets, and a variety of seafood.

There are several terms regarding this tapas, here are some of the meanings of the terms tapas that I have summarized:

Meanwhile, I thought of making this when I watched an Indonesian film set in Spain.

The film tells about the love affair between Mahesa and Alana. They fell in love at first sight when they met in Barcelona. The conflict in this film is Danu (Alana’s boyfriend). He cares for his girlfriend through luxury items. But, he is very possessive and cheeky. It makes Alana unhappy. The conflict is Mahesa really loves Alana, while Danu feels Alana is his.

Oops, I became discussing the film. But, I don’t highlight the love story of Mahesa and Alana. I highlight the Spanish culture and food in the film. The food is so unique and mouth-watering.

I find out a variety of traditional foods in Spain. One of the common traditional Spanish foods is tapas. Tapas are indeed many forms and choices as I mentioned above. But for this time I will make Gambas Al Ajjillo which is simple and fast to cook. Are you interested in making it too? Let’s try and eat it together at home.

The Ingredients of Gambas Al Ajillo

How to Make Gambas Al Ajillo

Spread butter on both sides. Toast in the pan over medium heat for 10 minutes total. Flip halfway.

Heat olive oil and garlic in a skillet over low heat. Cook until garlic is turned golden around the edges, about 2-4 minutes.

Roughly chopped parsley and add it into gambas.

Stirring continuously until boil and the shrimp is cook about 1 minute. 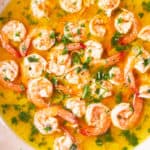 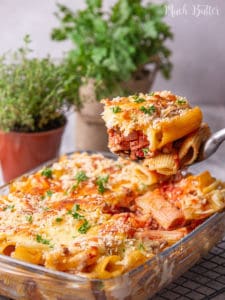 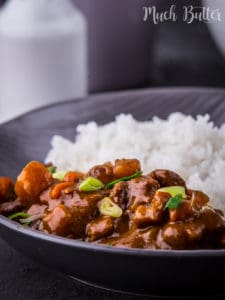